The Clearwater Country Club is located in downtown Clearwater in Pinellas County. In March 1920, city officials unanimously approved a proposed bond issue for the construction of a golf course and selected a site. A few weeks later, British golf course architect Herbert Strong arrived in Clearwater to begin to work on the plans and drawings for the proposed golf course. In April 1920, Clearwater residents voted overwhelmingly to fund a golf course for the city and work began soon after. The golf course property was bisected by a railroad and creek which ran through the entire property. Strong’s design worked around the railroad and he incorporated Stevenson Creek into design features on several holes.

After a year of construction, nine holes were officially opened. On Jan 26, 1921, Mrs. Daniel Simonds, who contributed money for the new clubhouse, hit the first shot, a nice drive down the fairway beyond the first bunker. The second ball was hit by the Mayor of Clearwater. Two years later, the completed 18-hole golf course was opened and ready for play.

In 1940, one of the nation’s best-known golf course architect, Perry Maxwell was hired by Clearwater Country Club to work on the course. Some of Maxwell’s best original designs are Dornick Hills Golf and Country Club and Southern Hills Country Club in Oklahoma, Prairie Dunes in Kansas and Old Town Club in North Carolina. Perry, along with his son Press Maxwell stayed in Clearwater while they worked on the remodeling and streamlining of seven greens on the golf course. After completing their work, Perry stated, “The course is now one of the sportiest layouts in the south” and went on to state “which won’t cause the duffers to cheer when they see how accurate their approaches must be to avoid trap trouble.” Opening of the Clearwater Country Club 1923 Postcard of the 8th Hole at Clearwater Country Club 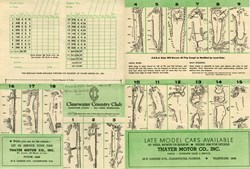 The Clearwater Country Club includes an 18-hole, par-72 golf course, featuring four sets of tees playing from 5,300 to 6,200 yards, that provide a test for golfers of any skill level. The course features Bermuda greens, tees, and fairways. Your round of golf at Clearwater Country Club could be interrupted by a train! The course is bisected by the CSX Railroad which runs through the middle of the layout. In addition, Stevenson Creek runs through the entire golf course and comes in to play on several of the 18 holes.

Full practice facilities are available, as well as a fully stocked pro shop and restaurant.  Clearwater Country Club strives to provide a casual and friendly atmosphere for the simple pleasures of golf, and is dedicated to offering players an experience of "Golf As It Should Be." 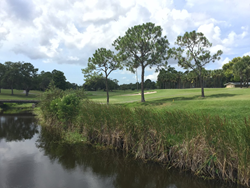 Forth Tee at Clearwater Country Club In February 1932, during a woman’s invitation golf tournament, a golfer drove her ball into the creek at the 13th (todays 5th hole) while looking for her ball her caddy spotted a large fish swimming in the creek. C.A. Thomas, Clearwater Country Club’s assistant greens keeper was called and proceeded to take the flag pole and spear the 110 pound, 63-inch tarpon. It was believed that the tarpon came up the creek during high tide. Local newspaper article went on to say that “Fishing tackle may hereafter be included in the equipment of golfers who play on the golf links of the Clearwater Country Club.” 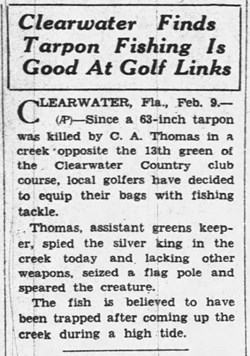 Clearwater’s Jake Russell Stadium – Constructed in 1954 (Still in Use)