The Crane Creek Reserve Golf Course is located in the City of Melbourne in Brevard County. Three months after the Melbourne Golf and Country Club was established in April 1920, M.K.V. Davis was brought in to lay out a golf course. Six holes were initially completed and the course was expanded to nine holes a year later.

In 1923, while visiting Melbourne, President Warren G. Harding missed a luncheon to play golf on the course. Several of the club members served as caddies for the president and his group. They liked the golf course so much that they played a second round. It was reported that the president stated, “I never have enjoyed myself more than when in your city on this beautiful golf course.”

As golf became more popular, it was decided that a complete 18-hole golf course was needed. In 1924, forty more acres were purchased and John Brophy from Miami Beach was initially consulted by the club to lay out the additional nine holes. However, on April 7, 1925, the club enthusiastically passed a resolution, without a dissenting vote, to engage the services of renowned golf course architect Donald J. Ross to lay out an 18-hole golf course. William H. Diddle of Indianapolis and Tarpon Springs was in charge of construction. The new 18-hole golf course was officially opened in December 1928.

The golf course would remain unchanged until the late 1970s when the city hired golf course architect William Amick to make extensive renovations the course. After being closed for a year, the course reopened on February 15, 1978, with a new clubhouse and new golf holes.

In 2007, the City of Melbourne officially renamed the municipal course to Crane Creek Reserve Golf Course. 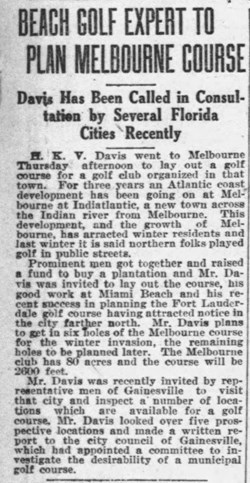 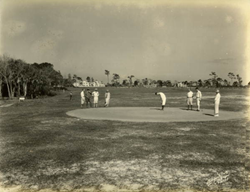 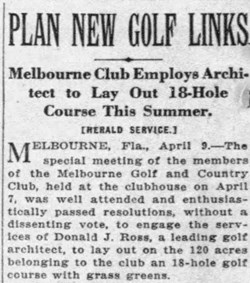 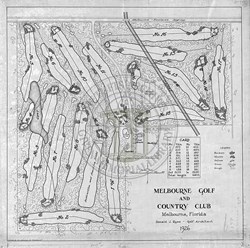 1930 Photograph of the Melbourne Golf Course 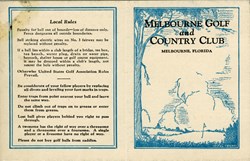 1941 Scorecard for Melbourne Golf and Country Club - Outside 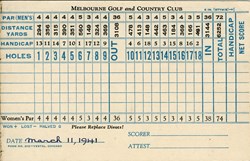 1941 Scorecard for Melbourne Golf and Country Club - Inside 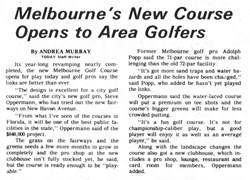 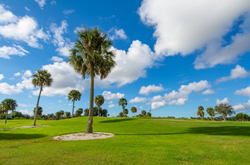 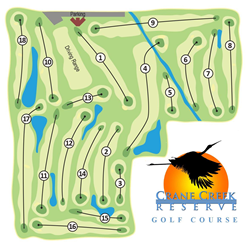 In 1922, along the banks of the Crane Creek canal, which runs through the golf course, a local resident (C.P. Singleton) found human remains from 10,000 to 8,000 BC along-side fossilized bones of a mammoth. Singleton reported his finds to the United States Natural Museum (National Museum of Natural History) and in late 1923, the USNM sent paleontologist Frederick Loomis of Amherst College to assist in the excavation. Two years later, the USNM sent James Gidley to assist in the investigations, and Loomis, Singleton, and Gidley spent six weeks excavating.

Loomis published his controversial conclusion that men and mammoths were contemporaneous in Florida during the Pleistocene. The human skull that was found came to be known as “Melbourne Man” and was exhibited at the 1925 meeting of the Paleontological Society of America, and studied at the Smithsonian Institution.

One of the unearthed mammoth skeletons now resided at the Beneski Museum of Natural History at Amherst College in Amherst, Massachusetts. In 2017, the college announced that it had selected the mammoth as the schools new mascot. 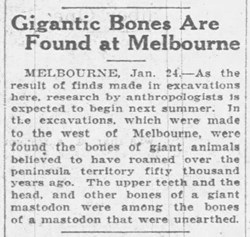 Gigantic Bones Are Found at Melbourne 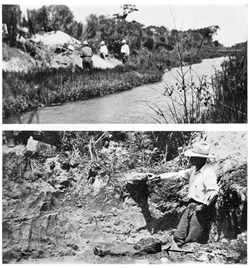 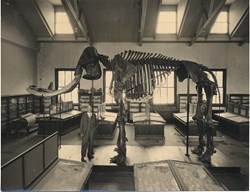 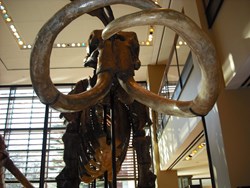 Mammoth on Display at Amherst College Museum of Natural History 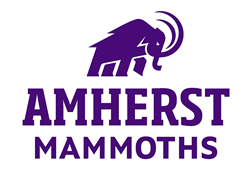 Surfing - The ancient Hawaiian sport has been a part of Florida’s culture dating back to the early 1900’s. While not known for large waves, Florida is known for producing some of the world’s best professional surfers. One of the all-time greatest competitive surfers is Cocoa Beach native and 11-time world Surfing Champion Kelly Slater.

Caroline Marks, Melbourne Beach’s own surfing phenom, made history at the age of 17 as the first woman surfer to be selected to the inaugural U.S. Olympic surfing team to compete in the 2020/2021 Olympic Games in Tokyo.

Melbourne Beach and beaches throughout Brevard County, from Cocoa Beach to Sebastian Inlet, are great for all levels of surfing. The area has many consistent surf breaks and is the perfect place to learn how to surf. Several surf instructors and surf camps can be found throughout the county.

You can also learn about Florida’s rich surfing heritage through exhibits, research and preservation at the Florida Surf Museum in Cocoa Beach. 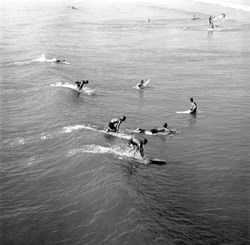 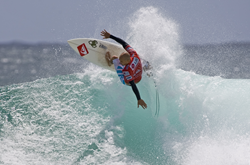