The Dunedin Golf Club is located in the City of Dunedin in Pinellas County. In 1925, the Michigan firm of Frischkorn-Florida, headed by Ephraim S. Frischkorn, purchased 1,500 acres for the development of the Dunedin Isles Subdivision. In February of 1926, Frischkorn-Florida announced it would construct an 18-hole golf course designed by the legendary golf course architect Donald Ross. Work on the course started in 1926 when Ross and his staff visited Dunedin to look over the site. The golf course was finished ten months later, although some details remained to be completed. On New Year ’s Day, 1927, Frischkorn officially opened the golf course with a drive from the 1st tee.

Fred Rigden served as the first golf professional at Dunedin and also worked at the Country Club of Detroit during the summers. Rigden was a noted club maker who made golf clubs under the name “Rigden Perfect”. The course was very popular with golfers including Gene Sarazen, who played the course regularly and set the course record in 1929 with a 65.

In 1945, the PGA of America signed a lease with the City of Dunedin to turn the course into the PGA National Golf Club. With that distinction, the golf course hosted 18 Senior Tour Championships, leading to the beginning of the Senior PGA Tour.

In February 1946, the biggest names in golf at that time, Sam Snead, Ben Hogan, Byron Nelson and Harold “Jug” McSpaden, known as the big four, played in an exhibition match to benefit the rehabilitation fund for PGA war veterans. Both Snead and Hogan were military veterans, Snead having served in the Navy and Hogan in the Army. Prior to the match, each golfer was given a deed to a home site in the Dundedin Isles subdivision. Before a gallery of several thousand fans, Snead and Hogan won 4 and 2 with Snead shooting a course record 66.

In 1954, a handful of golf merchandisers assembled in the parking lot at PGA National Golf Club at Dunedin during a series of winter tournaments. From humble beginnings in Dunedin, the PGA Merchandise Show, has become the world’s largest and most influential golf business event. In a few short years, the Show became so large, with nearly 50 manufacturers’ representatives, that PGA officials leased a tent to house the growing event. Today, the PGA Merchandise Show has become a global gathering. Held annually in Orlando, the marketplace occupies nearly 10 miles of aisles, featuring more than 1,000 companies, and over 40,000 PGA Professionals, buyers, and industry leaders from 81 countries.

On June 4, 2014, the Dunedin Isles Golf Club became the third golf course in Florida to be listed in the National Register of Historic Places. 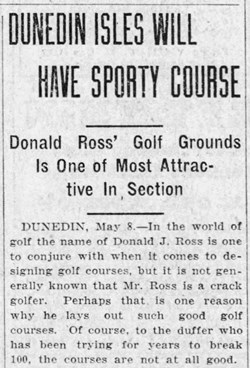 Dunedin Isles Will Have Sporty Course 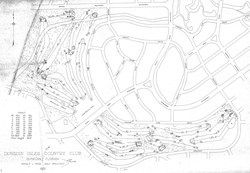 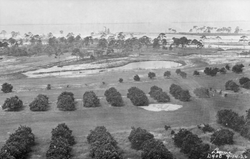 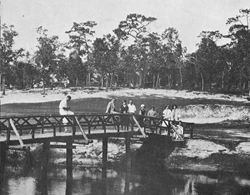 Bridge to the 11th Hole at Dunedin Isles 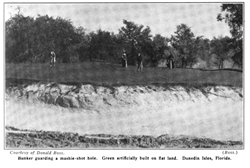 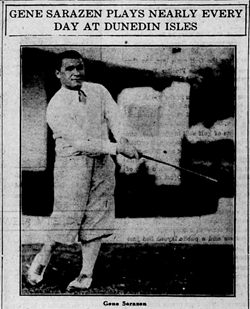 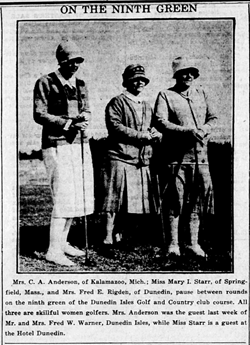 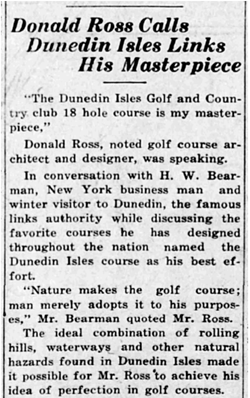 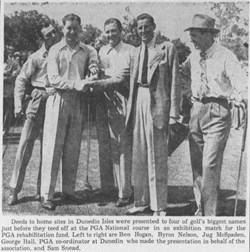 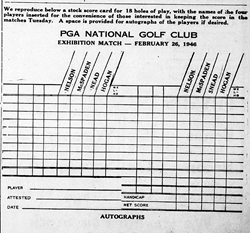 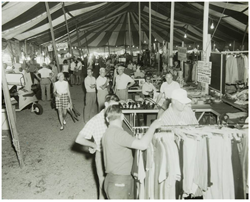 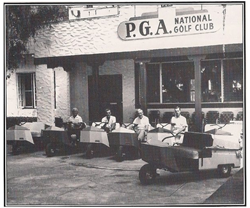 The Dunedin Golf Club includes an 18-hole, par-72 golf course featuring five sets of tees playing from 4,700 to 6,600 yards, making it an enjoyable golf course for all levels and abilities of golfers. In 2008 the club was named "2008 Country Club of the Year" by Tampa Bay Magazine, and in 2014, Dunedin was voted the best golf course in the St. Petersburg/Clearwater area. 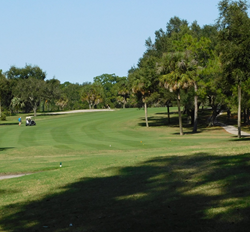 In 1928, Dunedin golf course was the site of a new record in golf. Dunedin Isles assistant golf professionals Johnny Raimondi and Fred Sladden (the nephew of Fred Rigden, head golf professional) set a new record for the number of holes played in one day at Dunedin. They played 263 holes in 16 hours and 12 minutes!

How did they play that many holes so quickly? Instead of walking, they rode motorcycles from shot to shot and from hole to hole, breaking the old record by 20 holes! Sladden and Raimondi with Their Golf Bags in the Motorcycles

Dunedin’s Celtic/Scottish heritage - In the 1800’s Scottish families settled and brought their customs to the area. The name “Dunedin” is taken from Dùn Èideann, the Scottish Gaelic for Edinburgh, the capital  of Scotland.

Dunedin has maintained its strong Scottish roots throughout its history, with its charming village–like setting and many Scottish societies, traditions, and stores can be found throughout the city, including the Famous Dunedin Pipe Bands and highland dance groups. Past Highland Games at Dunedin