The Eglin Golf Course's Eagle Course is located in the City of Niceville in Okaloosa County. Although the golf course is located within the city limits of Niceville it was originally associated with the town of Valparaiso. In 1922, Chicago businessman James E. Plew (founder of the Chicago Towel Company), came to Valparaiso and became one of Northwest Florida's pioneer developers. He founded the Bank of Valparaiso and constructed the Valparaiso Inn.  At the same time, he organized the Chicago Country Club of Valparaiso, which constructed the golf course. Memberships were marketed to Chicago businessmen, doctors and lawyers who came to the area.

The golf course operated as a 9-hole course until 1927 when the firm of William Langford and Theodore Moreau was hired to design an 18-hole course. In November of that same year, 200 golfers left Chicago aboard a special deluxe train to attend the formal opening of the golf course. Noted golf writer John Healy wrote, “Facing a landlocked bay down in the Gulf Coast country, on the Vale of Paradise, where the sun shines and shines, where the breezes are balmy and gentile, lies as ‘sporty’ an 18 hole course as may be found south of the Mason-Dixon line.” Like the fate of many private golf clubs of the late 1920s, the country club went bankrupt in 1929, and the name was changed to the Valparaiso Country Club.

In 1934, Plew offered the U.S. government a donation of 1,460 contiguous acres for a bombing and gunnery range that became known as the Valparaiso Bombing and Gunnery Range. In 1937, the base was re-designated Eglin Field in honor of Lieutenant Colonel Frederick I. Eglin, U.S. Air Corps, killed on January 1, 1937, in an aircraft accident. Plans for Laying Out an 18 Hole Golf Course at Valparaiso Teeing Off at the Chicago Country Club Valparaiso Florida c1920s Construction at the Chicago Country Club Close-up of the Construction at the Chicago Country Club Valpariso

Circa 1932 Aerial of the Chicago Country Club Golf Course Eglin Golf Course Complex offers a second 18 hole course, the Falcon. The 36-holes of championship golf sit on 450 acres with 250 acres of fairways and greens covering two golf courses. Open year-round, Eglin is one of the top ranked courses in the military. Eglin Golf Course offers a lighted driving range and a practice complex with a chipping area, a sand bunker and a large lighted putting green. 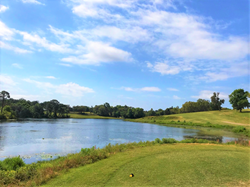 The Eagle Course has two unique holes, the 6th and 7th, which require a blind tee shot over a hill. After playing the second shot, golfers must ring a bell, located on both sides of the fairways, to alert the players behind them that it’s safe to tee off. On the 6th, players ring the bell once and on the 7th they ring it twice.

The 7th hole used to have another very unique feature for a Florida golf course - a rope tow! To help golfers “climb up” the steep approach to the 7th green, a powered rope tow (similar to ones seen on a snow ski course) was installed on the right side of the fairway. It also helped golfers who carried their clubs or used a pull cart. It was removed several years ago but the crumbling asphalt path is still evident. Bell at 6th Hole - Left Side of Fairway Bell at 6th Hole - Right Side of Fairway Close-up of Bell at 6th Hole - Left Side of Fairway Bell at 7th Hole - Left Side of Fairway

Stand-Up-Paddleboarding-The sport of stand-up-paddle boarding (SUP) has exploded since the mid-2000s. Popularity has spread beyond beach towns to inland, where SUPs can now be seen at the beach, bay, lake or river.  An SUP features the stability of a kayak and the fun factor of a surfboard, for a variety of activities including racing, exploring and fishing.

Some form of stand up paddling has been around for thousands of years. Florida ’s own Seminole Indians poled and paddled their dugout canoes from a standing position in the Everglades.

Two of the SUP industry leaders, YOLO and Bōte, are located a short drive from the Eglin Eagle Golf Course and steps away from the beautiful white sands and emerald green waters of the Gulf of Mexico. Visit YOLO Board and Bōte Board for more details. Paddleboarding in the Gulf of Mexico 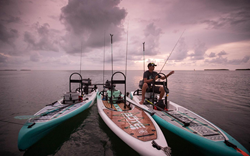