On land described as ‘flatter than a pancake,’ Langford and Moreau designed a spectacular layout which included an island green and tee out in the Gulf of Mexico. During the same year, construction began on the island’s coral rock foundation. Dynamite was used to blast away coral for the fairways. Masterful engineering was needed to build this course at that this location. Dirt was brought in from the mainland on barges. The greens were initially planted in Kentucky Blue grass but it could not withstand the summer heat and was replaced Bermuda grass.

Langford stated that “the site for the golf course presented unusual difficulties such as would be found nowhere else in America, nevertheless the course is coming along fine and shows great improvement.” Both Langford and Moreau made visits to the site. Langford said that it had a beautiful setting “as it is on the waters of the gulf.”

While holes were being completed, the City allowed golfers to play for free. Nine holes were officially opened on September 3, 1924, however, the Langford & Moreau designed 18-hole plan was never completed due to financial reasons.

In 1934 the Federal Emergency Relief Administration (FERA) took over the operation of the 9-hole golf course and began to fill in the sand bunkers and grass them over to lower the maintenance cost.

The golf course was frequented by President Dwight Eisenhower in the 1950s while staying in Key West. During the 1960’s, nine holes were added to make it an 18-hole golf course. Twenty years later, in 1983, golf course architect Rees Jones and co-designer Keith Evans completely redesigned the entire golf course property.

On October 24, 2005, Hurricane Wilma generated an eight-foot storm surge that flooded the Key West Golf Club with four feet of salt water and inundated the irrigation ponds with ocean water, leaving no source for fresh water.  However, the golf course remained open and some golfers even came out to play the day after the storm. In the summer of 2006 and 2007, the club rebuilt the greens on all 18 holes.

The Key West Golf Club is the southernmost golf course not only in Florida but in the continental United States. 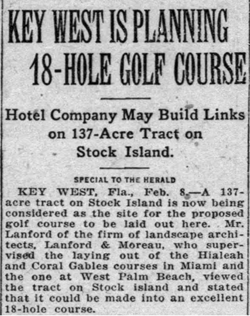 Langford and Moreau Hired as Architects for Proposed Golf Course 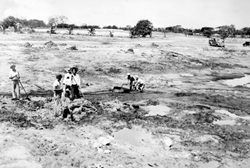 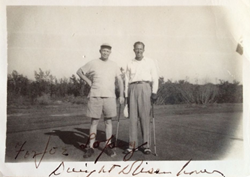 The Key West Golf Club is an 18-hole, par-70 golf course, featuring four sets of tees playing from 5,000 to 6,500 yards, will challenge players of all abilities. Located at the entrance to the island of Key West, the 200-acre club showcases stately palms, dense mangrove lined fairways, serene lakes and undulating muti-tiered greens.

The golf course has several challenging holes, including the infamous 8th hole. The par-3 "Mangrove Hole,” plays from a 129 to 185 yards, completely over a field of thickly intertwined tropical mangroves. 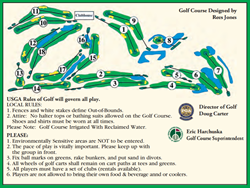 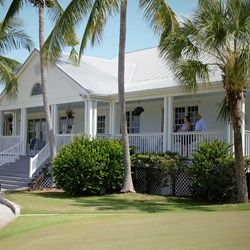 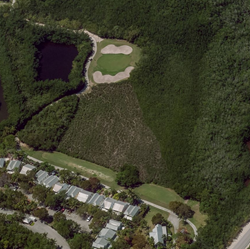 Tee shot at the 8th Hole 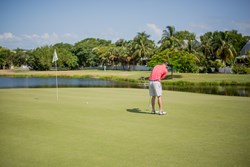 Located at the end of Kokenzie Road and behind the current clubhouse, stands the original clubhouse for the Key West Golf Club. Today, it is the Arthur Sawyer American Legion Post 28 Key West.

In 1923, the newly formed club wrote letters to four Miami architects requesting that they submit plans for a proposed clubhouse. The club selected the design by Martin Hampton, who was a very prominent architect in south Florida. Hampton was one of George Merrick’s original design team in the creation of Coral Gables, Florida. Today, several of Hamptons buildings are listed in the National Register of Historic Places. However, it is not known if Hampton's plans were used.

The clubhouse formally opened in 1926. The first floor is constructed of reinforced concrete and originally contained a grille, shower baths, and lockers for the members, while the second floor contained a ball room. The American Legion took over the clubhouse in 1947.

The American Legion is a national effort chartered by Congress in 1919 as a patriotic veterans organization. Focusing on service to veterans, service members and communities, the Legion evolved from a group of war-weary veterans of World War I into one of the most influential nonprofit groups in the United States. Visit the Arthur Sawyer American Legion Post 28 Key West for more details. 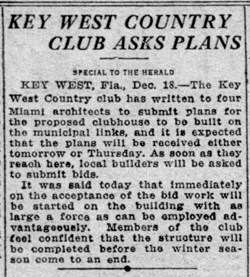 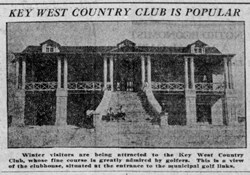 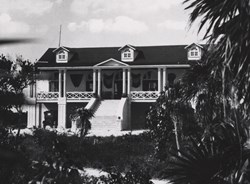 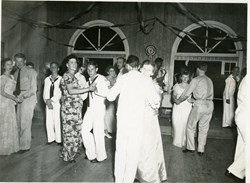 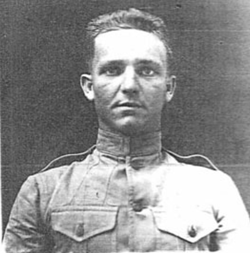 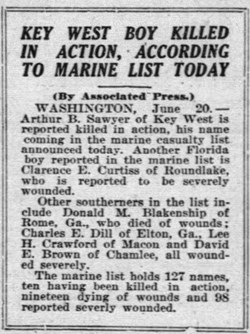 Newspaper Article on the Death of Arthur Sawyer 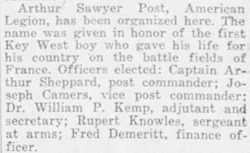 Naming of American Legion Post in Honor of Arthur Sawyer 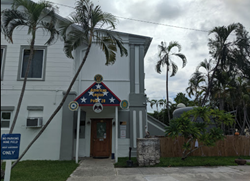 Southernmost Point – After playing the southernmost golf course, visit the Southernmost Point in the continental United States. Erected in 1983, the larger than life concrete marker was designed to look like a buoy. Located at the corner of South Street and Whitehead Street, it has become one of the most visited and photographed attractions in Key West.  From here take a short walk to other Key West attractions such as the Fort Zachary Taylor State Park, Truman Little White House and the Ernest Hemingway Home & Museum. 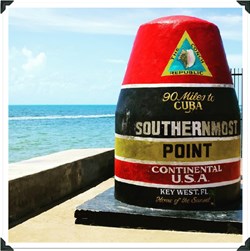 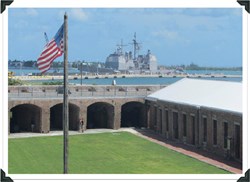 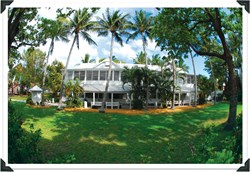