Normandy Shores Golf Club is located on the northern end of Miami Beach in Miami-Dade County. In 1923, two mangrove-covered islands in Biscayne Bay were being developed by Henri Levy and his associates. In honor of Levy's French heritage, it was renamed the Isle of Normandy and the streets were named after French towns and provinces.

The developers originally planned to create one large island with a golf course in the center, however, they ended up building two separate islands. Workers starting dredging and filling to create the South Island, now called Normandy Isles. Unsuccessful in building a golf course, the developers eventually sold the North Island, which would be later be named Normandy Shores, to the City of Miami Beach.

The City soon made plans to build a municipal golf course and began to dredge and fill to create the man-made Normandy Isles. In 1936, the City began working with William S. Flynn of the golf course architectural firm Toomey and Flynn. He planned to make this new course one of the sportiest municipal layouts in the country. Flynn made several visits to the site and after his inspection in December 1940 he stated “The laying out of the Normandy Isle course offered a different problem from any that I had undertaken before.” Flynn added, “On most of the jobs you are given a topographic map of the section and then it is up to the architect to make the holes as sporty as possible.” Normandy was just the opposite as it was drawn out first on paper and then the land was pumped in to fill the requirements.

Construction of the golf course took longer than expected due to the difficulties encountered growing grass on the spoil that had been pumped off the bottom of Biscayne Bay because of its heavy salt content.

The golf course opened for play on January 23, when Maryland visitor Edgar Reed had the honor of being the first player to tee off that morning and ended up shooting a 97. The golf course was officially dedicated on December 18, 1941.

The golf course underwent major changes in 1966, when the grade was raised several feet and 14 artificial lakes were added to address the flooding issues. The site of the old driving range became the new 18th hole and the former 18th became the new and enlarged driving range. Miami Beach Mayor Elliot Roosevelt (son of President Franklin D. Roosevelt and First Lady Eleanor Roosevelt) hit the first ball on the reopening of the golf course.

In 2008, the City of Miami Beach spent over $9 million to renovate the golf course. Golf course architect Arthur Hills was hired to redesign the aging course and bring it back to its former state of glory.

1924 Aerial of Normanday Isle Prior to Development 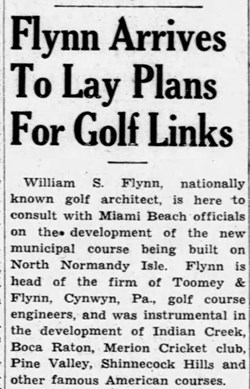 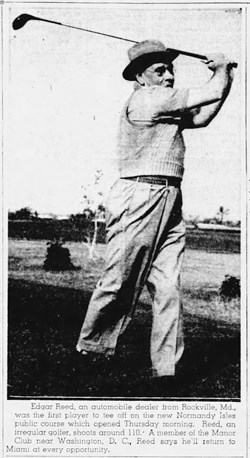 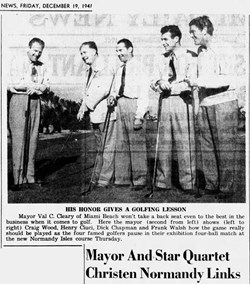 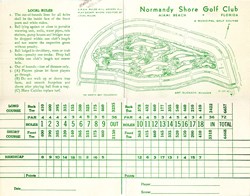 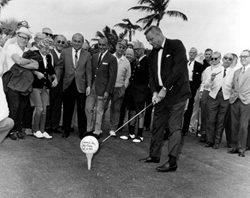 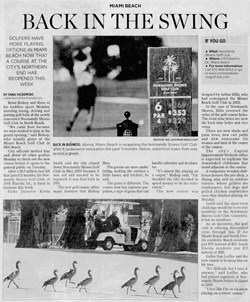 The Normandy Shores Golf Club includes an 18-hole, par-71 golf course featuring four sets of tees playing from 5,000 to 6,800 yards. Soothing breezes off Biscayne Bay and tropical wildlife provide the backdrop for an enjoyable round of golf at this beautifully renovated hidden jewel. The course offers a challenge to golfers of all skill levels; be ready to use your mind as well as your swing to negotiate the rolling fairways featuring bunkering in landing areas. 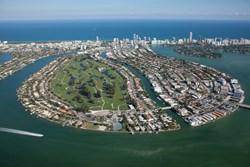 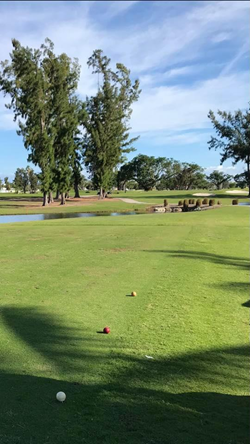 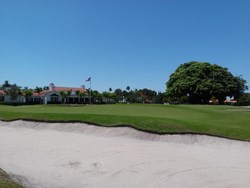 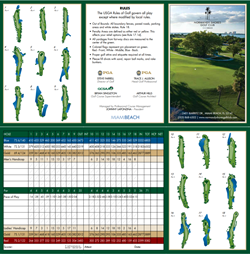 In 2010, the City of Miami Beach opened the current Normandy Shores clubhouse, a reproduction of the original clubhouse that had been designed by prominent architect August Geiger in 1941.

The structure was rebuilt and retains the same footprint and façade as the original. The updated and spacious interior features a well-appointed lobby, full-service restaurant and bar, a pro shop, and men’s and women’s locker rooms that rival modern country clubs.

Geiger also designed the original Miami Beach golf course clubhouse in 1916, which is still existing today. Considered to be one of the oldest public buildings in Miami Beach, this locally designated historic landmark was recently renovated and is known as the Historic Carl Fisher Clubhouse. 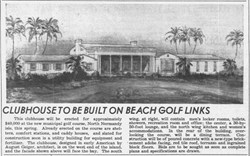 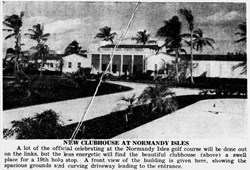 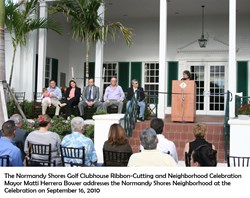 Reopening Ceremony of Clubhouse in 2010

North Beach – Located just minutes from Normandy Shores Golf Club, North Beach has been described as “laid-back oceanfront living at a leisurely speed!” Unlike its southern counterpart, South Beach, which has the bustle, energy, and vibrant sense of adventure, North Beach has the relaxation and the escape where you will find locals and visitors enjoying the sand and surf, with plenty of space to spread out.

Here you will also find the North Beach Bandshell — a historic, open-air amphitheater built in 1961 in the Miami Modern architecture style. A popular Miami Beach music venue, the bandshell currently hosts regular concerts from around the world, and for almost sixty years, it has brought people together in the spirit of community, culture and entertainment. Visit https://www.miamiandbeaches.com/neighborhoods/north-beach for more information. 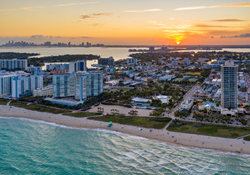 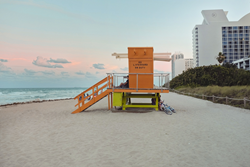 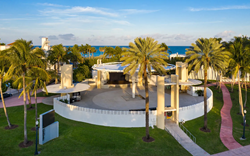 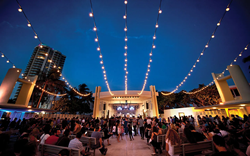