In 1926, Singer presided over the opening of the new 18-hole golf course designed by Seth Raynor.  Newspaper articles described the new course as being accessible by either automobile or by fast motor boats direct from the club’s steps. The golf course became known as the Palm Beach Winter Club.

In 1935 the Winter Club was purchased by Sir Harry Oakes, who used the clubhouse as a part- time home. Several owners and years later, the club and golf course were purchased by the Village of North Palm Beach in 1962 and opened a year later. The original 1926 clubhouse remained until 1980.

Workers and Mules During the Construction of Palm Beach Winter Club 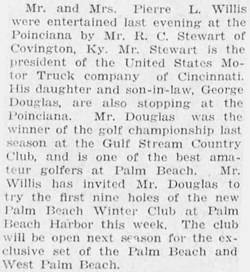 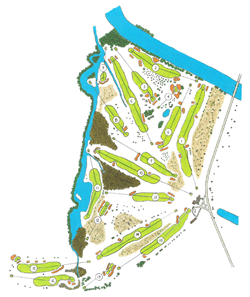 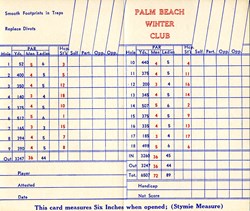 View of the 5th Hole Along the Intracoastal Waterway 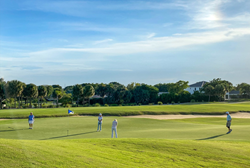 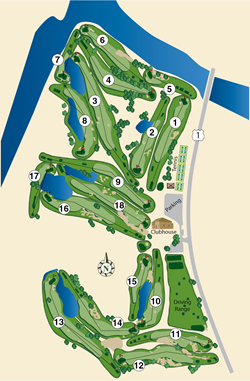 For the multi-million dollar 2006 renovation project, Jack Nicklaus charged the Town of North Palm Beach only one dollar. The Nicklaus Design team redesigned the golf course, which included a new irrigation system, total re-grassing of all the playing surfaces, new greens construction and improved fairway surface drainage. Latitude 36 Bermudagrass was used for tees, fairways and roughs, and TifEagle for greens.

“The course features two dramatic holes along the Intracoastal Waterway,” said Chad Goetz of Nicklaus Design. “It is routed on top of a natural sand dune [the Seminole Ridge] that offers elevation changes rarely found in southern Florida.”

Bunkers were filled with a fresh layer of distinctive orange sand, which is mined from the site. The property contained a variety of sands–white, gray and orange. According to Nicklaus, the orange sand turned out to be some of the best bunker sand they have found in the state.

“I have lived in North Palm Beach for more than 35 years. I feel that it’s a good community, a community that has supported me and my family. This was my way to give a little something back to the community and the people who have given me so much. If I am able to do that with a very good, modestly priced golf course for the people of the Village, that brings a certain sense of satisfaction. This has been a fun project, and one of which I am very proud.” – Jack Nicklaus 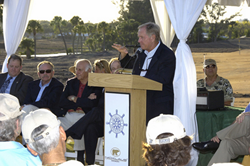 Jack Nicklaus Speaking at the Groundbreaking Jack Nicklaus and the Design Team During Renovation Jack Nicklaus and Design Team at the 14th Green

Peanut Island Park - This unique 80 acre tropical park is situated in the Intracoastal Waterway near the Lake Worth Inlet. The park is a favorite destination for boaters and provides numerous recreational opportunities for visitors.

Peanut Island was originally created in 1918 as a result of material excavated when the Lake Worth Inlet was created. The name Peanut was given to the island when the State of Florida gave permission for use of the island as a terminal for shipping peanut oil. Plans for this enterprise were abandoned in 1946, but the name was retained.

In 1961, during the Cuban Missile Crisis, the SeaBees secretly, and very quickly, built a bunker on Peanut Island for President John F. Kennedy, who spent a great deal of time at the Kennedy Compound in nearby Palm Beach. Although it would have been a temporary command center for the nation in a time of crisis, it was relatively small. It was constructed adjacent to the U.S. Coast Guard Station, concealed in the woods and underground, but above the water table. The bunker had fallen into complete disrepair, but was restored in 1999 by the Palm Beach Maritime Museum. Visit Peanut Island Park for more details. 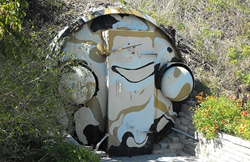