The Osceola Golf Course is located in the city of Pensacola in Escambia County. Interest in developing a municipal golf course in Pensacola began in 1924, and a year later, the Pensacola Junior Chamber of Commerce had raised money for the project. In May of 1925, local businessmen George P. Wentworth and Hunter Brown donated 100 acres of land for the Junior Chamber of Commerce golf course.

Shortly after the land was secured, the Pensacola News Journal reported that Rockwell Scalley, local golf professional at Pensacola Country Club, was lending his services to design the new course. However, a few months later, the Junior Chamber of Commerce signed a contract with A.G. Seifried of the landscape architectural firm Seifried & Troeger to build the golf course. Seifried had recently completed building courses in New Orleans, Baton Rouge and Alexandria, Louisiana.

By August 1925, Seifried crews had started clearing the tract of land for the new 18-hole golf course. Less than a year later, on May 1, 1926, the golf course opened nine holes to the public. The 3,204 yard, par 36 course included a 230-yard par 3. A Pensacola News Journal article stated “Golf is rapidly becoming a popular game for ‘Young America.’ It is surprising the amount of interest taken in the great game by young boys and girls and by men and women of all walks of life.”

Meanwhile, the city of Pensacola had approved a special $100,000 bond for construction of a municipal golf course but had never built one. In September of 1929, the City purchased the Junior Chamber’s golf course for $36,000 with plans to use their remaining balance to complete the second nine holes and make other improvements.

A few months later in February 1930, the city hired prominent golfer “Wild Bill” Mehlhorn as head golf professional. Mehlhorn was an accomplished professional golfer with over 20 wins. He also was a member of the first official Ryder Cup team in 1927 that won the inaugural match over the British team. One of Mehlhorn’s first tasks when he arrived in Pensacola was to direct the completion of the second nine holes. On October 12, 1930 the City officially opened its new 18-hole golf course under the new name, Osceola Golf Course.

On December 29, 1935, Osceola Golf Course got a visit from Albert W. Tillinghast, one of America’s most renowned golf course architects. At the request of Osceola golf pro Tony Penna, Tillinghast had stopped in Pensacola to inspect the golf course as part of his work with the PGA. After walking the course with Penna and suggesting improvements, Tillinghast stated that Osceola compared favorably with any golf links in the south and was one of the best public courses in the country. Formal Opening of the Golf Course The 18-hole, par-72 Osceola Golf Course features four sets of tees playing from 4,900 to 6,400 yards. Operated by the City of Pensacola, Osceola prides itself on being very affordable, and is the area’s leader in promoting junior golf. Osceola Golf Course’s General Manager and Head Golf Professional Adrian Stills was nine years old when he first picked up a golf club on the encouragement of his brother, Roy Jr. His father, Roy Sr., a golfer and former caddy, provided him with the fundamentals of the game and he quickly became one of Pensacola’s best junior golfers.

A standout golfer at Pensacola Catholic High, he graduated in 1975 and received a golf scholarship to South Carolina State University where he became a four-time NAIA All-American. After college, Adrian turned professional and won over 30 mini-tour events. Then in November 1985, after five attempts at qualifying for the PGA Tour, Adrian earned his card for the 1986 season. He would go on to play in 26 events including the 1986 and 1998 US Open Championships.

Adrian was the last African American to reach the PGA Tour via qualifying school until 25 years later, when Joseph Bramlett qualified in 2010.

Adrian’s tireless dedication to promoting the growth of the game of golf is unmatched in this area and he is considered the “dean of golf professionals” in the Big Bend area of northwest Florida. In 2012, Adrian was inducted in the National Black Golf Hall of Fame. 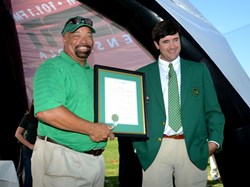 Pensacola Goofy Golf - Located in the City of Pensacola, Goofy Golf was built by Jacob Pryor and his wife Helen in 1958. Pryor, also owned an amusement park in Biloxi Mississippi. Additional holes were added in the late 1970s with statues and hazards from a competing "Sir Goony's" mini golf course.

In 2004, Hurricane Ivan severely damaged the facility and it would close a few years later. However, in 2016, The First Tee of Northwest Florida purchased this historic Goofy Golf and remodeled and re-opened it as the Golf & Life Skills Training Facility for the First Tee of Northwest Florida. The two 18-hole, par-72 golf courses are open to the public for play, though hours vary, so be sure to confirm open hours by calling or visiting their website.

Don’t be shocked if you see two-time Masters Champ and PGA Tour winner Bubba Watson playing next to you. The Pensacola resident grew up playing Goofy Golf and is a big supporter of the First Tee program. Watson hosts a mini-golf tournament at the Goofy Golf course, where one hole is named after his candy store in downtown Pensacola, Bubba’s Sweet Spot.

Pensacola Goofy Golf is also a partner course on the Florida Historic Mini Golf Trail, which features courses that are over 50 years old.  Putt your way across Florida's beaches, through the feet of a giant sphinx, around snakes and monkeys, next to giant tiki heads and much more.