The Ponte Vedra Inn & Club's Ocean Course is located in the unincorporated community of Ponte Vedra Beach in St. Johns County. What is now Ponte Vedra Beach remained sparsely populated through the late 19th century. In 1914 minerals, including titanium, were discovered in the local sands and a community known as Mineral City grew up around the mining operations of the National Lead Company. After World War I, the National Lead Company changed its focus to building a resort community. In the early 1920s, the company had built a 9-hole golf course and 12-room log clubhouse for the use of their employees. The community name was changed to Ponte Vedra, apparently after the city of Pontevedra, Galicia, Spain.

In 1928, golf course architect W.D. Clark of Chicago was hired to design and build a new 18-hole golf course named the Jacksonville Beach Golf Links. Due in part to prevailing ocean breezes and natural hazards, the golf course was declared to be just as hard as or harder than the Lido Course in Long Island, which had the reputation of being the hardest course in America at the time.

In 1931, British golf course architect Herbert Strong was hired to develop and build an 18-hole golf course. Roy Landrum Sr. was superintendent for the job. “Am laying out a course for the National Lead Company” stated Strong in a March 1931 Canadian Golf Magazine article, “Lots of dredging and filling in to be done here as you can image but it is surprising what can be accomplished in the sandy soil on this proposition. For instance, the ninth green which will be entirely surrounded by water was quite a problem – all the fill had to be put up by the drag line, about twenty thousand cubic yards of dirt was placed here”.

A 1932 edition of the Florida Times-Union reported, “Thirty men are employed in the construction of the new half-million dollar golf links to be known as Ponte Vedra. The 130-acre golf course will have a $50,000 irrigation system and is part of the development of 17 miles of ocean frontage owned by the National Lead Company.” Strong used 100 mules dragging slip pans to shape course contours, dredge lagoons and build up a series of earthen mounds that dot the fairways creating dramatic undulations. The new 18-hole layout opened in 1932.

High praises have showered the Ocean Course from the very beginning. In a 1938 Golf Magazine article, Ponte Vedra's Ocean Course, Pebble Beach (CA), Oakmont (PA), and Pine Valley (NJ) are featured as the "Hardest Courses in America." In 1942, after completing a match on the Ocean Course, golf legend Bobby Jones commented, "it's a course to challenge professionals".

The Ocean course has undergone a number of renovations beginning in 1947 when Golf architect Robert Trent Jones was commissioned to redesign the course in an attempt to reduce some of the course's severity. In 1951, the Ocean Course hosted the Ponte Vedra Women's Open, drawing a powerful field of professionals such as Patty Berg, Louise Suggs and its winner, Babe Zaharias.

Bobby Weed renovated the course in 1998 and again in 2020 along with MacCurrach Golf Construction. Weed completed a comprehensive restoration of the course that returned the layout’s bold contours, brawny bunkering and wind-swept character. 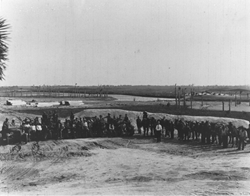 Construction of the Ocean Course - Crew and Mules - c1928 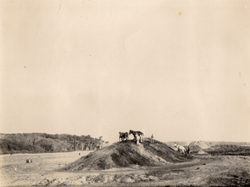 Construction of the Ocean Course - Mound and Mules 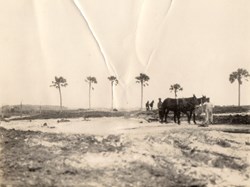 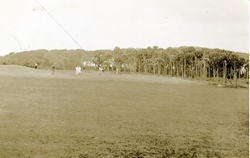 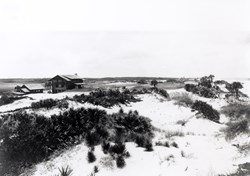 Original Clubhouse for the Ocean Course 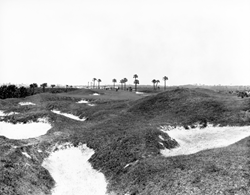 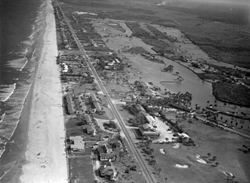 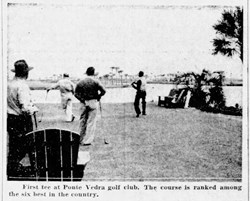 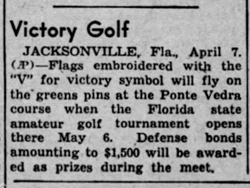 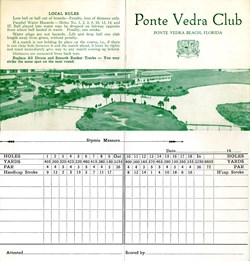 1946 Scorecard for the Ocean Course 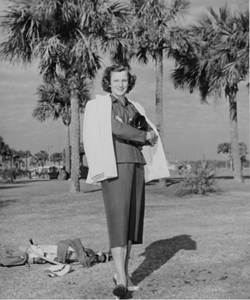 The 18-hole, par-71 Ocean Course at the Ponte Vedra Inn & Club features five sets of tees playing from 4,900 to 6,800 yards. The course captures the essence of a modern seaside design with expansive fairways, strategically placed bunkers and lagoons with newly designed green complexes.

The resort also features a second 18-hole golf course, the par-70 Lagoon Course, which has its own unique identity while nicely complementing the Ocean Course.

*Please note: To enjoy play on the Ocean Course, you must be a member or a registered guest at the Ponte Vedra Inn & Club. 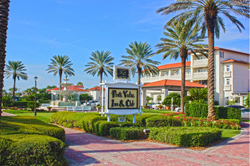 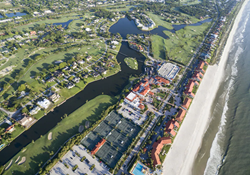 Golfers on the Ocean Course at Ponte Vedra Inn & Club 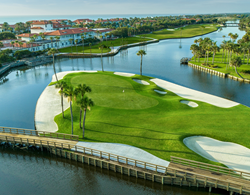 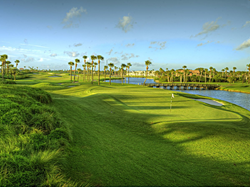 16th Hole at the Ocean Course

18th Hole at the Ocean Course 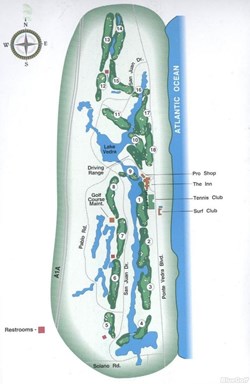 Layout of the Ocean Course at Ponte Vedra Inn & Club

The Ocean Course was selected as the site for the 1939 Ryder Cup Matches. United States Captain Walter Hagen said that the selection of the Ponte Vedra course was a very sporting gesture toward the English team, since their players felt at home on links by the sea where the wind plays tricks. The already difficult layout was lengthened to 6,829 yards in anticipation of the matches.

Unfortunately, just months prior to the scheduled November event, the match was cancelled due to the onset of World War II. A message via cable from Charles Roe, Secretary of the British Professional Golfers Association, was sent to the PGA of America national office in Chicago that read, "When we have settled our differences and peace reigns, we will see that our team comes across to remove the Ryder Cup from your safekeeping."

Even after the cancellation the PGA of America selected  ten-man team. The United States team consisted of Victor Ghezzi, Ralph Guldahl, Jimmy Hines, Dick Metz, Harold McSpaden, Paul Runyan, Horton Smith, Sam Snead, Henry Piccard, and Byron Nelson. Over the next few years the team played in numerous exhibition and challenge matches to raise money for the Red Cross and other wartime charities. 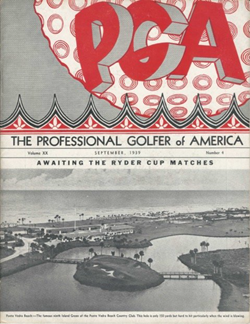 Historic Exhibit at the World Golf Hall of Fame Challenge Hole at the World Golf Hall of Fame

The King & Bear Golf Course at the World Golf Village

The Slammer & Squire Golf Course at the World Golf Village