The Riviera Country Club golf course is located in the City of Ormond Beach in Volusia County. Plans for Rio Vista on the Halifax, a 1924 development envisioned by an Ohio developer, included a golf course. In February 1926, under the supervision of prominent Chicago golf course architect W.D. Clark, workmen began construction of the golf course. By 1927, a hotel, 38 homes and more than 15 miles of paved roads had been developed. But this all came to a halt with the onset of the Great Depression. The arches that once marked the entrance to Rio Vista on the Halifax are among the few remaining structures from the development.  Located on Calle Grande Street, the archways and Romanesque columns were built as a grand entryway for the Rio Vista subdivision platted in 1926.

In late 1953, the golf course was purchased by the Meyers family, and a year later the nine holes were remodeled by golf course architect Mark Mahannah. In 1967, an additional nine holes were designed by architect Dave Wallace.  Over the years, well-known golf architect Lloyd Clifton gave a facelift to several holes and was instrumental in the look of the course and its present-day character.  The Riviera Country Club is home to the longest-running Mini-Tour Event in the country, The Riviera Open, which began in 1960. Rio Vista on the Halifax Ad 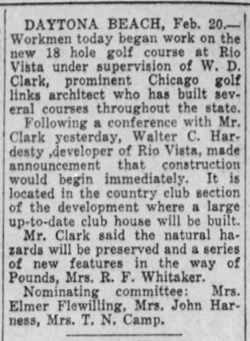 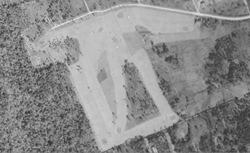 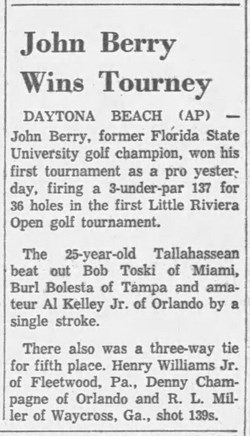 Winner of the Inaugural Riviera Open in 1960

The Riviera Country Club includes an 18-hole, par-71 golf course featuring three sets of tees playing from 5,100 to 6,200 yards. Owners Eric and Charlotte Meyers continue the family tradition of a well-maintained and beautifully manicured championship course in the Ormond Beach area. Named one of Golf Digest’s Best Places to Play in 2008-2009, Riviera Country Club welcomes golfers from around the world who enjoy a relaxed atmosphere where no tee times are required. 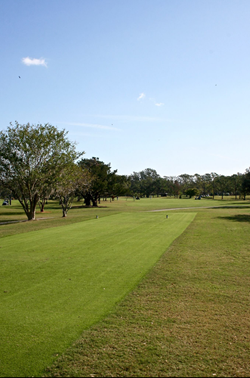 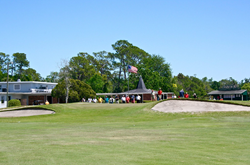 The par-4 10th hole was originally the 1st hole of the 1920s 9-hole golf course and retains its original routing. The fairway of this short par-4 is wider than it appears, but only if you can make it past the fairway bunker on the right. Any ball that makes it 220 yards off the tee will roll out down the hill, leaving only a short pitch to this well-bunkered green. Players need to think twice before swinging from the heels, however, as out of bounds right and a collection of trees to the left will force them to find the short grass if they want to coax a birdie out of the shortest two-shotter on the course. The green has a gentle slope from rear left to front right, and is usually firm due to its elevation. Players are encouraged to plan for the rollout with their approach.

The Casements - One of the most famous of Ormond residents, John D. Rockefeller, believed he would live to be 100 years old. Determined to accomplish this, he sent his employees to find the most pollution-free place to spend his winters in retirement. They chose Ormond, on Florida’s Atlantic coast. In 1918, after staying at the Ormond Hotel for four winter seasons, Rockefeller purchased his winter cottage “The Casements.”  Rockefeller passionately loved golf and believed that the game was good for his health and played almost every day when he was in Ormond Beach.  Visit The Casements  for more details. Front Facade of The Casements 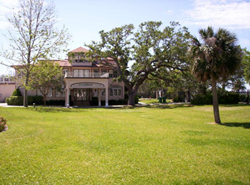 Side View of The Casements 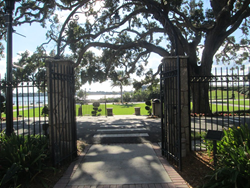 Rockefeller Gardens at The Casements 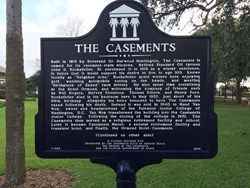 Florida Historical Marker at The Casements - Back