The Rogers Park Golf Course is located in the City of Tampa in Hillsborough County. During the segregation era, the property that is now home to Rogers Park Golf Course was an African American community park in Tampa. After church on Sundays, many families would spend the day on the swings, slides, baseball field and picnic area. The park is named after African American businessman and philanthropist Garfield Devoe Rogers who donated the land to the City of Tampa for a park and golf course. The park was dedicated in 1951.

That same year, Tampa Mayor Curtis Hixon gave permission to a group of African American caddies, who worked at Palma Ceia Country Club to build a 9-hole golf course at Rogers Park. The work was led by Willie Black, originally from Albany, Georgia, who had previously helped build several golf courses in Georgia. Black directed a group of volunteers to remove trees and shape the land by hand. Work on the 9-hole course was completed in 1952 and Willie Black became the first Head Golf Professional at the course.

In 1961, the course was expanded to 18 holes when an additional 9 holes were constructed on an adjacent parcel of property to the west of the park. After the golf course was desegregated in 1963, it became a golfing destination for amateur and professional golfers throughout the nation.

“We have the finest race relations here of any municipal course in the United States” stated Willie Black in 1966.

In 1976, the City of Tampa gave management rights to the newly formed Tampa Sports Authority, and a $400,000 renovation project began with Ron Garl as the designer.  In 2000, the Tampa Sports Authority decided that a $4 million renovation was needed. Holes were reshaped and landscaping features were added  to enhance the character of Rogers Park Golf Course. In 2001 a new maintenance compound was completed, followed by a new clubhouse in 2002.

In November 2014, the original Rogers Park Golf Course site became the fourth golf course in Florida to be listed on the National Register of Historic Places. Willie Black and John Everhart at Rogers Park in 1952 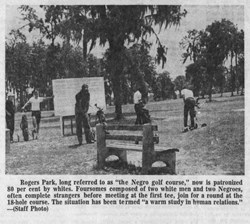 Today, the 18-hole, par 71 Rogers Park Golf Course features five sets of tees playing from 5,000 to 6,800 yards. The course offers a serene adventure and a great golfing experience for golfers of all skill levels. Located only 20 minutes from downtown Tampa, Tampa International Airport and the beautiful beaches of Tampa Bay, the 160-acre golf facility is surrounded on three sides by the Hillsborough River, which offers isolation from homes and the hustle and bustle of busy streets.

Rogers Park is home to the First Tee of Tampa Bay program. The program began in 1991 as Urban Junior Golf at Rogers Park Golf Course in Tampa. The concept was to offer affordable and accessible golf opportunities to children from moderate socio-economic backgrounds, and to use the inherent social and recreational values associated with the game to shape the lives of each participant. Formed in 1999, The First Tee of Tampa Bay now provides more than 70,000 children each year with hands-on, interactive golf experiences along with introducing them to The First Tee’s Nine Core Values. First Tee introduces young people to a series of life skills such as goal setting, meeting new people, and staying healthy - and provides them with the opportunity to develop life-enhancing values like confidence, perseverance and judgment.

In 2018, The First Tee of Tampa Bay was the leader in the First Tee network in the number of certified participants (8,703 children) and in the top 10 percent in the number of outreach participants (74,000 children). The First Tee serves as a program of the Tampa YMCA, and partners with the Tampa Sports Authority, the City of Tampa, and others. Through introductory programs in over 75 Hillsborough County public schools, afterschool programs at several local courses, or week-long summer camp experiences, The First Tee shows children that golf is more than a game – it’s an opportunity to become the very best they can be. Visit First Tee of Tampa Bay for more details. In addition to the driving range, Rogers Park Golf Course features a three-hole short game practice area located around the large pavilion between the 12th, 13th and 16th holes. This is a great place to work on your short irons or to just introduce someone else to the game. Tampa and Baseball – From the Chicago Cubs to the Smokers and the Giants and the Tarpons, the city of Tampa has a long history with professional baseball. In 1913, the Chicago Cubs moved their spring training site to the city of Tampa. In 1919, Tampa fielded a minor league team called the Smokers, in honor to the local cigar industry. Tampa also had a semi-professional team in the Florida State Negro League, the Tampa Giants later named the Pepsi-Cola Giants. The team was comprised of African Americans and Afro-Cuban players. And from 1946 – 1951, Tampa’s own Senaida “Shoo Shoo” Wirth played shortstop and pitcher for the South Bend Blue Stockings in the All American Girls Professional Baseball League.

To honor the legacy of Tampa’s baseball heritage a museum is being developed. The Tampa Baseball Museum will cover more than 130 years of Tampa's baseball history and be a place to celebrate the Tampa Bay area's rich baseball history with memorabilia and exhibits. The museum building was once the childhood home of Al López, Tampa's first Major League player, manager, and Hall of Fame inductee. Visit Tampa Baseball Museum for more details. 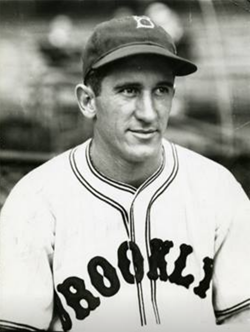