The Sailfish Sands Golf Course is located adjacent to the City of Stuart in Martin County. In early 1923, plans were developed for a new 18-hole golf course to be built as part of the newly organized St. Lucie River Country Club. The country club was to be part of a larger club known as the St. Lucie Golf Club and Tennis Court Club.

The club hired the golf course architectural firm of William Langford and Theodore Moreau of Chicago to design an 18-hole course. The firm brought in C.E. Yoder to supervise its construction. Yoder worked with Hugh Willoughby, Jr., who was the clubs' greens committee chairman on the construction of the course. In 1924, Moreau informed the club that construction of the first 9 holes were completed and would be ready for play later that year. On January 10, 1925, William “Billy” Langford was given the honor of teeing and driving the first ball of the new nine hole golf course.

In 1947, Martin County acquired the 9-hole golf course and renamed it the Martin County Golf & Country Club. The golf course officially opened as a complete 18-hole golf course in 1963 after Ernest Smith designed the nine hole addition. Ron Garl, a golf course architect from Lakeland, designed another nine holes in the 1970s, creating a 27-hole layout. A decade later, the last nine holes were added to complete a 36-hole layout. The older 18-hole course, designed by Langford and later Smith, was known as the Red/White course. The Ron Garl 18-hole course was called the Blue/Gold course.

In 2020, facing financial issues and a need to move out of the airport's runway protection zone, Martin County hired golf course architect John Sanford to renovate and downsize the 36-hole complex. During this time the course was renamed the Sailfish Sands golf course. Kevin Abbate, Director of Martin County Parks and Recreation, challenged Sanford to come up with creative design approaches for the golf course. Their efforts resulted in incorporating parts of the old Red/White course into the creation of Florida's first reversible 9-hole course, the Sands 9 course. Sanford stated, “we understood that we needed to create a new dynamic approach to this project and we believe we exceeded the project scope.”

The Sands 9 Black arrangement plays clockwise, while Sands 9 Gold plays counter-clockwise. “Both routings feature a nice variety of par threes, fours, and fives with multiple playing angles so that all players can enjoy the reversible experience,” explained Sanford.

Sailfish Sands won the American Society of Golf Course Architects Environmental Excellence Award in 2021 and a year later received Honorable Mention for the Development of the Year from Golf. Inc. 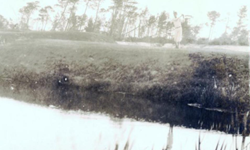 Sailfish Sands has everything you need to improve your game! The full-length grass driving range is powered by Toptracer Range, where you can compete against friends, play virtual courses, see your shot trace, and receive instant stats.

Hitting Bays at Sailfish Sands bring next-level golf entertainment to your next night out or business gathering in a boutique setting. With 20 climate-controlled hitting bays, guests can experience a modern spin on golf while enjoying delectable food & hand-crafted cocktails from the full-service Sailfish Sands Restaurant & Bar! The concept of a reversible golf course is not a new idea. The Old Course at St Andrews, Scotland was originally routed “clockwise” as opposed to todays “counter-clockwise” routing. By the 1870s the counter-clockwise routing became the preferred. However for many decades after, the Old Course could be played in reverse for several weeks out of the year. In the 1929 classic golf architecture book, The Architectural Side of Golf, a section was devoted to the reversible course and the authors even provided a drawing.

The Sands 9 at Sailfish Sands is an innovative reversible 9-hole course and is one of the very few reversible courses in the United States. The course is set up to be played in one direction and then flipped on a different day to play the opposite direction. The reversible course alternates between its two directions, Sands Black and Sands Gold, on Mondays, every other week.

The Black Course starts near the Pro Shop, proceeds clockwise around the routing, and ends near the driving range. The Black Course is the more challenging and longer course of the two nines. The signature hole on the Black Course is hole No.7, which overlooks the airport and plays at 427 yards from the back tee. The hole plays to a tight fairway with water on the left and a fairway bunker on the right. The approach shot will be a mid to long iron into one of the most undulating greens on the course protected by two green-side bunkers and out of bounds on the left.

The Gold Course starts near the driving range and proceeds counterclockwise around the routing and ends near the Pro Shop. The Gold Course is the shorter of the two nines. The signature hole on the Gold Course is hole No. 3, which is a risk-reward hole at only 305 yards, however, the golfer must choose which side of the split fairway, with water in the middle in play off the tee. The right side provides a better angle on to the green but has a very narrow fairway with 2 bunkers to capture any drives that may go too long. The left side is an easier tee shot to a wider fairway, but it is a much more difficult blind approach shot over a green-side bunker. 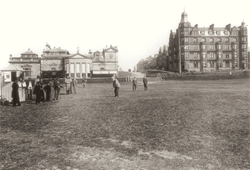 Old Tom Morris on the Old Links at St. Andrews