The Vinoy Golf Club is located in the city of St. Petersburg in Pinellas County. In 1920, St. Petersburg developer, C. Perry Snell officially opened a 9-hole golf course called the “Coffee Pot Golf Club.” C.D. Remington was the golf professional and caddies were available for 60 cents per nine holes or $1.00 for 18. A year later Snell added another nine holes along with a “Driving Fairway” for practice and a “Driving Net “practice area.

In 1926, Snell hired nationally known golf architects, Wayne Stiles and John van Kleek, who had offices in Boston and St. Petersburg, to build a modern 18-hole golf course. Stiles and van Kleek created nine new holes and reused nine from the existing golf course and it was renamed the Snell Island Golf Course.

In 1932, D.L. Clark, of candy bar fame, purchased the golf course for $156,000 and renamed it Clarks’ Sunset Golf and Country Club. In 1948, the Sunset Golf Course was purchased by the Alsonett Hotel Corporation, which owned the Vinoy, Soreno and Tides Hotels. Florida-based golf course architect Ron Garl redesigned the course in 1992. 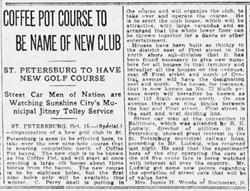 Coffee Pot Course to be Name of New Club 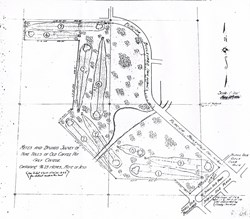 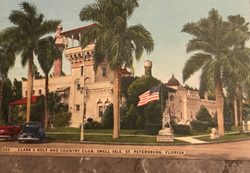 Postcard of the Clark's Golf and Country Club Clubhouse The golf course has been a certified Audubon Cooperative Sanctuary since 2008. Each hole is surrounded by diverse vegetation including over a dozen varieties of palm – over 900 in all - from around the world. Amidst the palms, the pines and the live oaks, players may find themselves lost in the jungle, or beached on one of the 54 bunkers strategically placed along the way. Located 1.7 miles from the Vinoy Hotel, a complimentary shuttle service to and from the Club is provided by the resort for its guests. A 1927 Mediterranean-inspired clubhouse overlooking the golf course houses a restaurant, bar and fully stocked pro shop.

* Please note: To enjoy play at the Vinoy Golf Club, you must be a member or a registered guest at the Vinoy Hotel.

Golfer Teeing Off at the Vinoy Golf Club

Aerial of the Vinoy Golf Club

As the story goes… the idea for the Vinoy Hotel began in the early 1920s with a bet, a watch, and a champion golfer. At his Beach Drive home, wealthy Pennsylvania businessman Aymer Vinoy Laughner made a wager with the famous golfer Walter Hagen.

Laughner bet Hagen that he could not hit golf balls off the top of Laughner’s pocket watch without breaking the crystal. The watch survived without a scratch, and the golf balls landed across Beach Drive on a residential waterfront property. When Laughner and another guest went to retrieve the golf balls from the neighbor’s lawn, the guest commented on what a nice site the waterfront home would be for a hotel. Laughner’s party guests suggested he purchase the property and build a grand resort – one that would carry his name. Laughner purchased the land for $170,000, and the rest is hotel history.

Led by architect Henry L. Taylor and contractor George A. Miller, construction for the Vinoy Park Hotel began on February 5, 1925. The contractor set a construction record, completing the 375-room hotel in just under 10 months, in time for a grand opening on New Year's Eve 1925.

The Hotel is listed on the National Register of Historic Places and has been named one of the “500 Greatest Hotels and Resorts in the World” by Travel & Leisure magazine. Readers of Condé Nast Traveler magazine have ranked The Vinoy as one of the “Best Places to Stay in the Whole Wide World.” 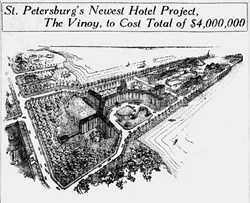 Proposed Drawing of the Vinoy Hotel 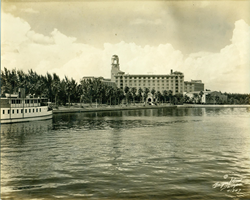 1930's Photograph of the Vinoy Hotel

The Vinoy Hotel Interior: Then and Now

St. Petersburg Shuffleboard Club –Senior citizens, 21st century youth, and all ages in between gather at the St. Petersburg Shuffleboard Club for the entertainment and camaraderie that is part and parcel of a game woven into the historical fabric of St. Petersburg. Games ranging from friendly to tournament level take place at the city’s historical landmark. Every Friday from 7 to 10 p.m., weather permitting, those looking to brush up on their shuffleboard skills or try the game for the first time can join in the fun. This free outdoor diversion includes use of equipment, access to volunteers who can guide newcomers on the basics, and the entertainment provided by members who create play lists on their iPods. Evening Shuffle at the of the St. Petersburg Shuffleboard Club